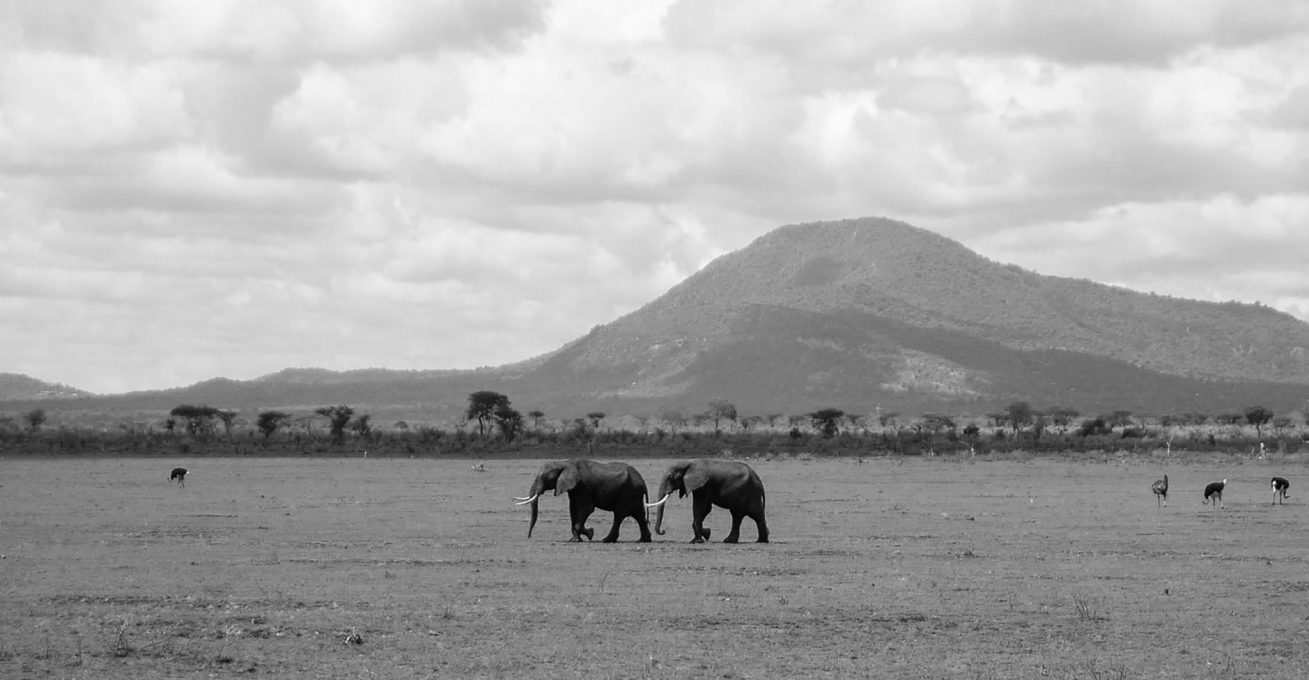 This is an old photograph I took with a Samsung digital camera nearly twelve years go in Kenya, Africa.The photo is of two elephants – brothers in fact – walking calmly across the plains of Tsavo East National Park. They were so relaxed around us that they almost walked into our jeep. The sound of their soft rumbling and sharp snorts of breath was captivating and moving. Later that night, a family of elephants visited a waterhole very near our camp and we were lucky to watch the herd drinking together. I have never been so close to wild elephants and probably never will again.

The image above was taken in colour but I’ve converted it to old fashioned black and white because there is a high chance that these beautiful boys are now gone. Faded into the past like this old photograph. Most likely brutally murdered for their ivory tusks which you can see gleaming white in the hot African sun. They would have died a horrible slow death at the hands of their killers all because someone somewhere wanted an ivory trinket or special ivory powder to help improve their sex lives. It’s a sobering and distressing thought and it makes you wonder what the hell our world has turned into. I have been to Africa three times in the past 12 years and each time, the elephant populations seem to get smaller and smaller.

In 2014, 20,000 African elephants were killed by poachers and between 2009 – 2015, Tanzania and Mozambique lost over half their elephant populations. Elephants are being killed somewhere in the world every 15 minutes.

An existing global embargo on ivory sales is due to end in 2007 but the European commission is opposing the return of the ban as it wants to encourage countries with growing elephant numbers to ‘sustainably manage’ their populations. The EU’s opposition to the total ban is almost too shocking to believe.

For the sake of the descendants of those brothers I photographed all those years go and for the future of all elephant families around the world, please please sign the petition that’s currently circulating on Facebook.  We have only days to act Here’s the link …..https://secure.avaaz.org/en/global_ivory_ban_loc/?rc=fb&pv=128.

This is happening now and it’s real. Let’s save these gentle grey giants now before they are completely wiped off our planet.

This site uses Akismet to reduce spam. Learn how your comment data is processed.